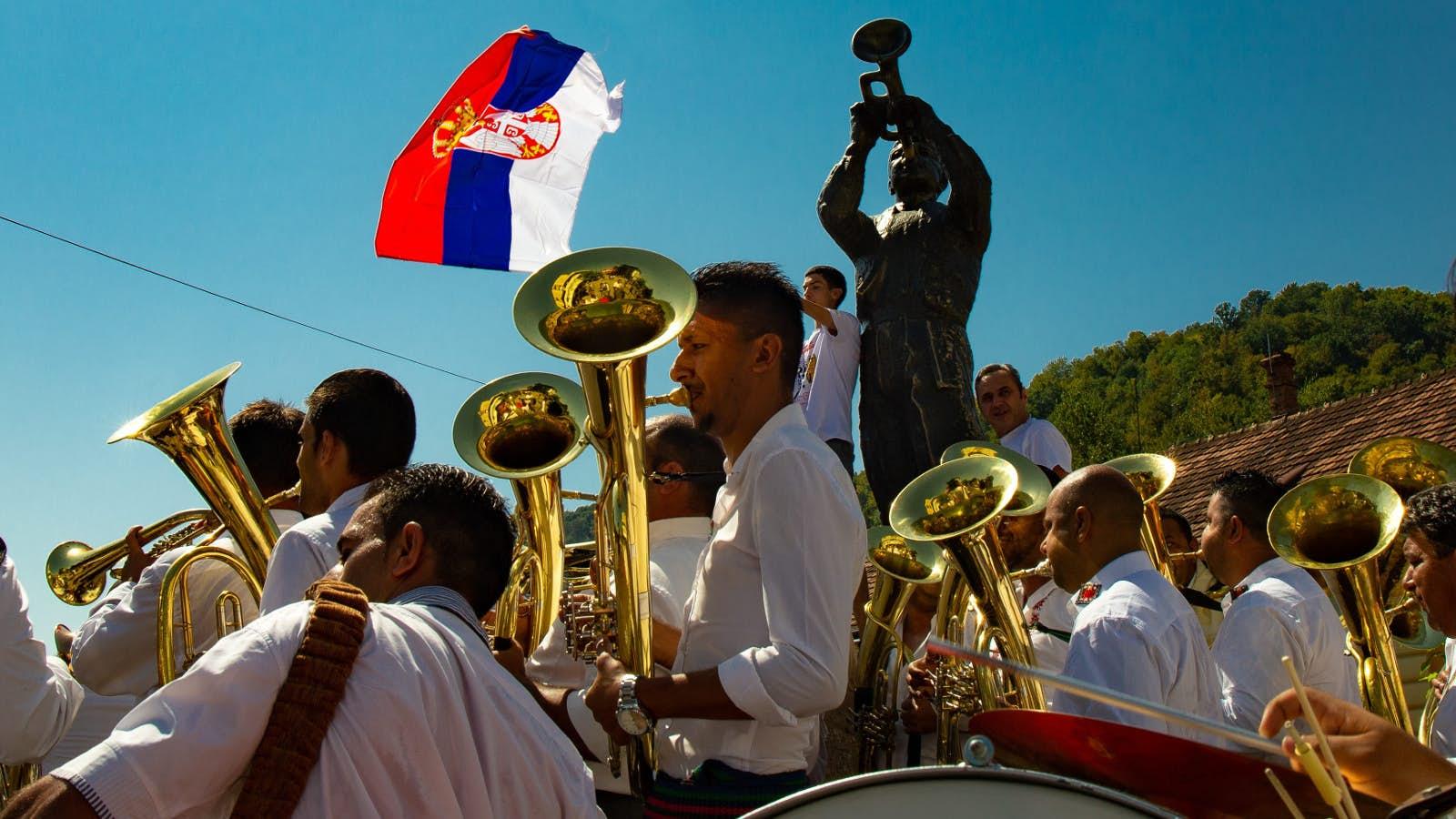 “People from all over the world come with all sorts of problems but at the Guca Trumpet Festival they find a release for everything negative. They eat, drink, form new friendships and celebrate together, they see positive energy.” Prof. Nikola Stojic, one of the founders of Guca Trumpet Festival.

We were in Belgrade during the start of August. Unlike its more popular Balkan neighbors Croatia and Hungary, Serbia still remains as a very under-spoken travel destination, not to mention a lot softer on your wallet. Many people don’t realise that Belgrade is a city that loves to party and parties spring out not just in clubs and bars but also on the rivers!

It was here, on the banks of the Danube where we were first introduced to the Serbian Truba: energetic, bold, and sometimes haunting. On our way back to our hotel, when we inquired about the instrument,  our local friend told us that we had come to Serbia just in time for the Guca Trumpet Festival.

Thus, after a hasty two days of arranging everything in Belgrade, began our journey to the Moravica district to witness the Guča Trumpet Festival.

What exactly is the Guča Trumpet Festival?

In short, the Guča trumpet festival or Dragacevski Sabor is an annual brass band music festival held in Guča, Serbia during the month of August. It celebrates the decades long Serbian art of playing trumpets and includes a full blown festival with multiple bands (known as orkestar) competing, dances like kolos and oros, local food and 3-4 days of dizzying partying.

How to get to the Guča trumpet festival? 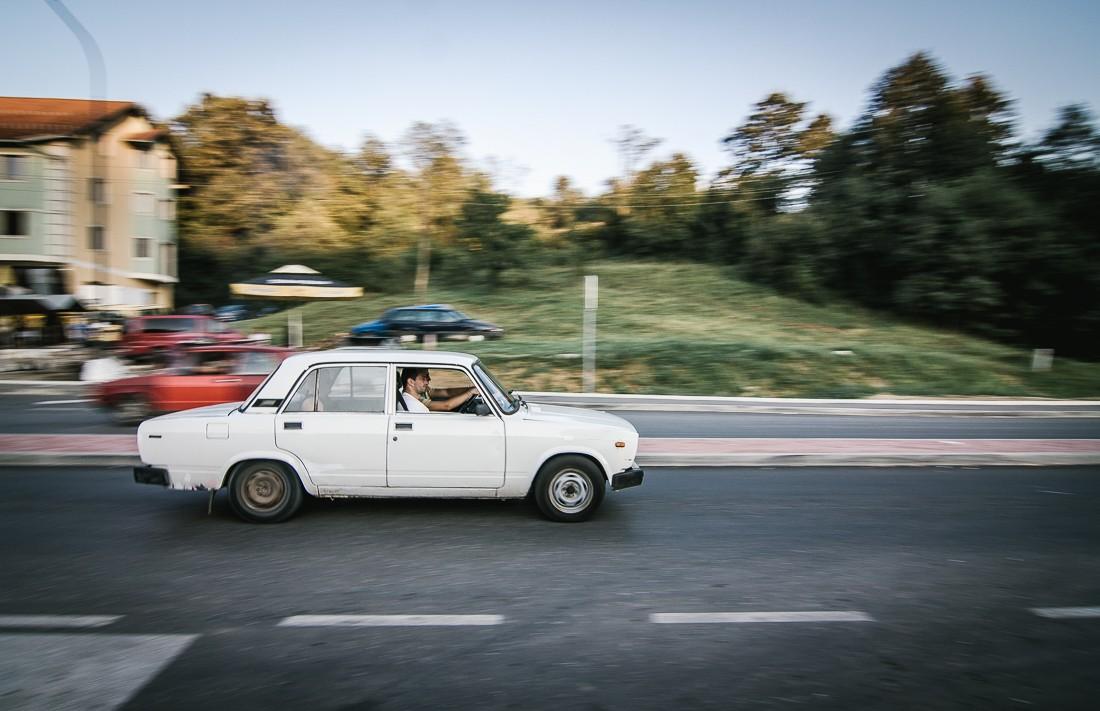 Guča, which is pronounced as Goo-cha, is a tiny town in the Moravica district of western Serbia. This small town lies 170.3 km south from Belgrade and is sandwiched between two other vibrant cities: Cacak and Ivanjica. Cacak is barely 20 km away while Ivanjica is 30 km and make for a good quixk visit before or after the Guča trumpet festival.

We took a car from Belgrade and it took us barely 3 hours to reach Guča. If you are in urgency to reach the Guča Trumpet Festival, you can cover that distance in half the time. However, we had multiple stops on the way as the roads leading to Guča is adorned by rolling green hills covered with fir, beech and oak trees which are a welcome contrast to the grey, dull outskirts of Belgrade.

It takes about 2 hours 35 minutes to get from Belgrade to Lucani (the municipality in which Guča is located). The bus run every hour, cost from $4 to $12 and from there you can take a short taxi ride to Guča which will cost you around $6 to $9.

There are 4 trains each day that run from the Beograd Centar in Belgrade to Pozega town in Zlatibor district. It coats around the same as the bus from $7 to $12 and from Prozega you will have to take a 26 minutes taxi to Guča which costs $15 to $19.

4 bus daily travel to Prozega from Belgrade via the scenic village of Milicevo Selo. It will cost you $8 to $10 and a 19 minutes taxi ride to Guča which is an additional $11 to $13.

This is the fastest way to reach the Guča trumpet festival from Belgrade as it takes barely 1.5 hours. However, the taxi also costs quite a lot at $95 to $ 120. You can also rent cars which are slightly cheaper.

The first Guča trumpet festival was held on 16th October, 1961 on the holiday of the protection of the Most Holy Mother of God in the yard of the local St. Micheal and Gabriel church. But, there is a long history behind how the trumpet, which can be quite an expensive instrument, came to be a symbol of traditional folk music in this small town of Serbia.

The peak of this war between Duklja (a region that covers most of modern day Southeastern Montenegro) and the Byzantines came when the Byzantine emperor Constantine IX marched his army based in Dyrrhachium (modern day Adriatic coast of Albania) to mountains between Bar and Crmnica to attack Duklja.

After the Second  Serbian Revolution against the Byzantine empire in 1815, trumpets became an integral part of the orchestra in the Kragujevac court under the rule of prince Milos Obrenovic.

Until now the trumpet was almost exclusive as a military instrument. However, it was only after World War I when the trumpet became the most popular folk music instrument in many villages of Serbia and after the end if the World War II, there were three clear schools of brass music in Serbia: The Eastern, Southern and Western schools.

Guča being in Western Serbia is influenced by the western school of Serbian brass music.

The idea first came from Blagoje Radivojevic who was a reporter of Politika, the oldest newspaper in the Balkans which still publishes to this day. Radivojevic suggested that the addition of trumpet players to the “Dragacevo through sing and dance” festival as a way to pay homage to the special place of trumpet in the Serbian heritage.

Breaking dissatisfaction caused due to politics through music. Professor Nikola Stojic who was a professor of literature and a local of Guča, then took the matters in his hands. Prof. Nikola Stojic wanted to break the environment of sadness and dissatisfaction caused due to political stagnation by energizing the small town of Guča through folk music. He fought with thw local council to organize a trumpet festival. But matters like these were easier said than done as Serbia was a part of Yugoslavia and was under the dictatorship of Josip Broz Tito. So, Stojic informed poet and editor of newspaper Duga, Branko V. Radicevic and together after knocking a lot of doors they finally got the permission to hold the first ever Guča Trumpet Festival on 16th October, 1961.

The first ever Guča Trumpet Festival had only four bands and all of them from neighboring villages. Founder Nikola Stojic remembers rusty trumpets with holes were repaired with wheat doughs. Desimir Perisic won the first competition and remains the only local musician to win it. In 2010, a 3 meter tall statue of Perisic was built on the roundabout on the entrance to Guča.

Slowly as the word of the Guča trumpet festival started spreading, the festival became bigger and bigger particularly since 1970.

Where to stay at the Guča trumpet festival?

We personally had a local homestay booked for us. But we clearly underestimated the size and intensity of the Guča trumpet festival. The whole village comes down, clearing fields and land to set camps for the visitors. The banks by the Bjelica river are covered with tents. It is a great opportunity for the people to make a few extra bucks to assist their livelihood apart from farming.

According to the latest census, Guča has barely 3,000 residents while more than half a million people descend down to this tiny western Serbian village just to attend this festival. In fact in 2017, there were around 700,000 visitors according to local authorities. This becomes important as fancier hotels, home stays and cabins are booked in advance as the date of the festival is announced.

You can get private hostels, and private homes that are booked by the event organizers. These start from €35 per person and can also include local sightseeing and trekking. If you want more ragged experience of the Guča trumpet festival, then you have camping options. Camps are provided with separate toilets and bathrooms and wifi.

Sleep may not always be guaranteed but great hospitality and warm hosts are a guarantee in Guča.

What to eat at the Guča trumpet festival?

Oh boy. The Guča trumpet festival can be a nightmare or paradise depending upon whether you like meat or not. There are slow pig roasts, a lot of slow pig roasts, buffalo meat, stew,klobasa sausages, sour cabbage and boiled beans with grilled meat. For breakfast you can try traditional kamjak, cheese, corn bread and plum brandy!

Meat is everywhere in the Guča trumpet festival. Thus, it can be quite a task to eat something if you are a vegetarian. However, there are local fruits and vegetable shops as well as cafes that do serve a few vegetarian items. You can pick the veggies from the local market and ask your home stay owners to cook it for you, which trust me, they will with a smile.

What happens at the Guča trumpet festival?

Well, a blanket of sound rises after a slow first few days, like a wave of trumpets, accordions, drums galloping, thudding with the town and covering it completely in a sort of euphoria. Rakija, a local beer flows in an ungodly amount, food is consumed at the peak of hedonism, dances break out at every corner while the music is non stop.

But, despite sounding like a chaotic music festival, Guča trumpet festival is managed and has a strict time table with a strong cultural aspect.

The first day, the Guča trumpet festival starts with the flag raising ceremony followed by official beginning with a press conference, art exhibition at the Trumpet Museum and a book fair. As the evening rolls in the youth trumpet competition starts which is followed with the concert that starts at 8 PM and runs past the midnight.

The final day is when everything goes to the fever pitch. There is folk costume selection, traditional concerts and from 6PM the Trumpet competitions start. These are serious affairs and in 4.5 hours of competition the winners are announced. The August heat doesn’t stop anyone from enjoying the legendary Boban and Marko Markovic concert followed by the winner’s concert.

Returning back to Belgrade 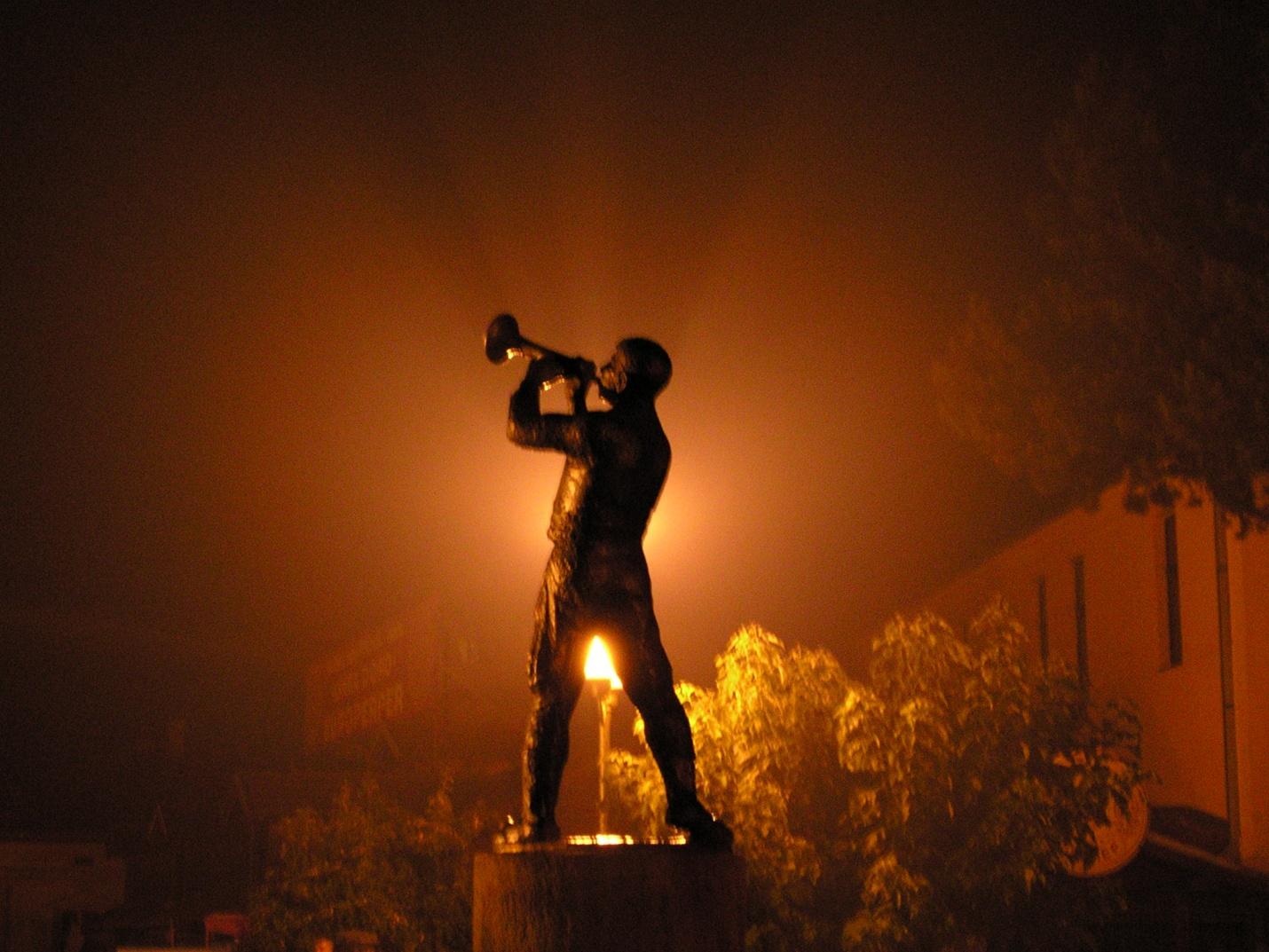 Returning back from Guča trumpet festival is like coming down off of a high, exhausting after days of hedonistic partying.The return journey is just as easy if not just as refreshing after 3 days of hedonistic eating and partying. However, one thing to be kept in mind is that there are no bus directly from Guča to Belgrade. You will have to take a short 30 minutes journey to Cacak and catch a bus there.